History of photography in Spain

As a photography teacher and director of academyforphotographers.com I like to read articles related to my profession and to be in continuous training, in this case I present you this short article translated from the original writing of Francisco P. Pastoriza about the history of photography in Spain.

In it he names some of the most important photographers and historians of our country, who make us understand the evolution of this art in the last 150 years.

Two books cover the history of photography, the names, trends and movements that have developed in Spain since 1839.

Some researchers of the history of photography claim that the Spaniard José Ramos Zapetti discovered a way of reproducing images in 1837, two years before the daguerreotype was popularised.

However, the lack of documentation in any record invalidates the possibility that this Spaniard was the pioneer of the invention of photography. This is one of the most repeated anecdotes in all the histories of photography in Spain since in the early years of the 20th century some authors began to concern themselves with historicising an art form that had begun to occupy a relevant place in Spanish society, as it was doing throughout Europe.


Photography expanded rapidly and unstoppably in Spain. Portraiture occupied dozens of photographers in a new profession that sprang up in the heat of the new invention. Portrait photographers such as Juliá, Martínez Sánchez, Godínez, Antonio Cosmes, Antonio Esplugas, Manuel Company... operated daily in the photographic studios that proliferated during the last third of the 20th century, initiating an activity that from then on and for many years did nothing but grow.

More than just a story

Since 2005, when Publio López Mondéjar published his magnum opus "Historia de la fotografía en España. Fotografía y sociedad. Desde sus orígenes hasta el siglo XXI" (Lunwerg), no one had covered the historical process of our photography with the breadth and rigour that Carmelo Vega, professor of Art History at the University of La Laguna, does in his recent book "Fotografía en España (1839-2015).

"Historia, tendencias y estética" published by Cátedra. Thirteen years have passed since the publication of López Mondéjar's book and the history of photography in Spain was in need of a review and an update because in these years new professionals have appeared and important events have taken place that have placed Spanish photography at the international forefront both in photojournalism and in social and artistic photography.


Carmelo Vega's book devotes the opening chapter to investigating the various histories of photography that have been published in Spain, from the first by Lee Fontanella and Marie-Loup Sougez in 1981 to the aforementioned by López Mondéjar. This is a manual that covers in its more than 900 pages the trajectory of photography in Spain with a methodology that represents, as a novelty, a new approach to the history of photographic art in Spain, not only with the aim of investigating the historical development but also of revealing its meaning and significance. Special attention is paid to little-known authors and events, as well as to non-Spanish photographers who developed their profession in our country, especially in the early years of the history of photography, and to the image of Spain that they disseminated throughout the world.


This history of photography in Spain does not stop at the big names or the best-known and most popular aspects but, without neglecting them, aims to study in depth the major aesthetic trends in photography in Spain, as well as the movements that were taking place outside our borders and which served as a reference for the authors who worked in photography in our country. A new feature of this book is the reproduction of articles published in specialised magazines throughout the years covered by this history of photography.


In "Fotografía en España. History, Trends, Aesthetics" also examines the role of commerce and advertising, fashions, technological advances in photography or applied to photography, its use in fields such as medicine and police investigation, and the role it has played in public opinion since the appearance of illustrated magazines, together with an approach to the new models of creation and dissemination of photography in Spain. Of particular note are the final chapters, one of which is devoted to women photographers, so often ignored in other histories and manuals, and another to specialised criticism, which is to be welcomed.

Another recently published book tells a peculiar story of the last eighty years of photography in Spain through 50 snapshots that have left an important mark on the collective imagination.

The photographer José María Díaz-Maroto and the researcher Félix Fuentes have coordinated the contents of "50 Photographs with History" (Signo Editores), a book in which the focus is on the photographer's gaze and the historical and social context in which the images were taken.


The pages of "50 Photographs with History" bring together the work of a wide range of photographers whose work has published images of wars, cultural events, tragedies, figures from contemporary history, and events of all kinds that have been covered by the media over the last century. Some of the leading names in Spanish photojournalism (Enrique Meneses, Gervasio Sánchez, Chema Conesa, Marisa Flórez...) and commitment (Sofía Moro, Xurxo Lobato) have been brought together with great portraitists (Alberto Schommer, Pierre Gonnord) and representatives of the experimental avant-garde (Cristina de Middel, Joan Fontcuberta).

- The experimental photography of Chema Madoz and Ouka Lele is mixed with works of photographic art by authors such as Pablo Pérez-Mínguez and Jorge Rueda.


There are also photographs that are already history, such as those by Francesc Català-Roca and Agustí Centelles.

These 50 photographs make up a historical period of a country that recorded the changes experienced during a republic, a civil war, a dictatorship and a political transition to the current democratic regime.


The texts accompanying the photographs explain the conditions and the moment in which each of these fifty images were taken and the selection process that the authors have carried out to discard alternative shots for each photo. To this end, contact sheets and additional photographs are provided to contextualise each image.

There are also anecdotes related to the authors of some of the photographs included. 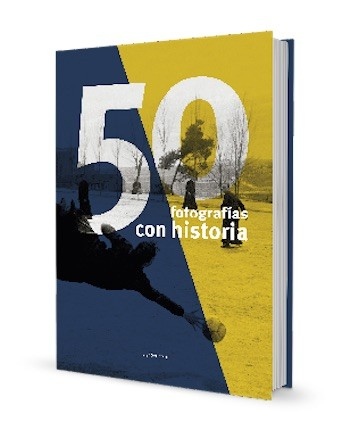 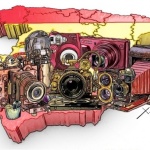