Here you can read the places I advise you to visit in Valencia while participating in my photo tours, maybe we will pass by some of them but they are not the main points in my photo walks.

Combining these visits with the photography walks you will get to know Valencia in depth and take great photos with you.

Theaters, cinemas, museums, courses, gastronomy, walks are some of the activities I suggest you.  Many of them are well known places and others not so many, this is my personal selection, the one I would make to enjoy Valencia.

Valencia is a big city where you can spend 4-5 days to discover and enjoy it.

Spectacular and free museum mainly of old paintings, located almost in the center of Valencia, next to the riverbed.

A jewel of a building full of small jewels of painting.

Valencia is a totally flat Mediterranean city, the ideal place for cycling, there are many stores that offer bike rental service in the center of Valencia as it is perhaps the best way to explore the city beyond the historic center.

More information
Go to the theater

Valencia has a wide range of theaters and almost all of them are in the center of the city, maybe if you do not speak Spanish you are not interested in a classical play but a musical can be a good option to enjoy and learn in depth about the Valencian and Spanish culture.

Cafe cocktails and snacks in a place with a neo-baroque air next to the religious and political heart of the city.

You can not miss the water of Valencia, a drink more consumed by tourists than by Valencians. A mixture of orange juice, vodka, gin and champagne that everyone likes.

The natural science museum is usually visited by children although it is open to everyone. It is in the middle of the royal gardens or nursery gardens and right next to an outdoor cafe so the visit can be a great experience: beautiful gardens + museum + fresh beer.

Bioparc is a must for animal and nature lovers. Scenarios are recreated for each animal according to the continent and climate to which they belong in origin.

It is a fairly new park, one of the most modern and respectful with the animals in Europe.

The Centre del Carme Contemporary Culture is a pure reflection of the history and artistic tradition of Valencia.

It bears the name of its coolest and most flavorful neighborhood in the city.

It is built over the old Royal Monastery of Nuestra Señora del Carmen de València, founded in 1281, after the Christian conquest. And that is how the most authentic neighborhood of the city received its name: Barrio del Carmen.

Since its creation at the end of the 13th century, the monastery has experienced the passage of history with several extensions and modifications that gave us the cloisters, the refectory or the chapter house. 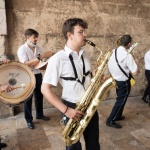 Valencian traditions to visit in our Spain photo tour

Parks and garden in our spain photo tour in valencia

The largest urban park in Spain, 10 kilometers of nature that crosses the city using the old Turia riverbed.

Garden full of special corners, fountains, people doing sports, scenic arts, etc. A special place to walk at any time, it is full of nature, shade and a pleasant temperature.

12 kilometers from the center of Valencia we have this freshwater lake surrounded by rice fields and traditional Valencian villages. In them there are very interesting restaurants where they serve the most traditional food with the best views.

A wonderful place also for photographers fond of viewpoints, sunsets and nature.

Neoclassical style garden ideal for walking and resting, of great aesthetic and naturalistic value, which has an area of 12,597 square meters. In it we find beautiful statues and vases, relaxing ornamental fountains, trees and shrubs of great beauty, trimmed hedges and flowering areas that make this garden one of the most beautiful in the city of Valencia.

A perfect place 15 minutes walk (from the center of Valencia) to relax and take pictures of flora and sculptures.